Not on the NEWS?

Have you seen RUMBLE?

The Indians Who Rocked The World

Jesse Ed Davis (Kiowa/Comanche, 1944–1988) grew up in a family of musicians in Oklahoma, where he was conscious of the racial boundaries that made him feel “a little weird being Indian,” especially when it came to pursuing rock and roll. Sought after by the biggest stars in rock because of his unique soulful sound, he was the lead guitarist for Taj Mahal.

Charley Patton (Choctaw/African American, 1887 est.–1934) was a seminal influence on the careers of Robert Johnson, Muddy Waters and Howlin’ Wolf and by extension an influence on rock, most notably the Rolling Stones. He spent his formative years with his family at Dockery Farms in Mississippi, and is a product of the little known mixture of cultures that found stable work and secure living conditions on plantations like Dockery. He raucously played the 1920s delta roadhouses and juke joint scenes and, in an era where the U.S. government banned drums and dance for Native and African Americans, creatively used the guitar as a percussive instrument.

Mildred Bailey (Coeur d’Alene, 1907–1951) has been praised as the first non-African American jazz singer to successfully adapt the rhythms and improvisational flavors of Dixieland and ragtime into swing jazz. Mildred started out with some of the best jazz musicians in New York City, where she was a regular act at the first integrated speakeasies. Her unique style of singing, now a standard for jazz singing, is uncannily similar to the type of singing that Mildred heard on visits to the Coeur d’Alene Indian reservation with her Native American mother.


Link Wray (Shawnee, 1929–2005) originated a raw guitar sound shaped by volume, distortion and simple song structures that became a hallmark of rock and roll. He is almost universally credited with inventing the “power chord” and inspired such major rock figures as the Who’s Pete Townshend, MC5’s Wayne Kramer, Guns N’ Roses’ Slash and other guitar legends. His “Rumble” was an instrumental song that was banned from radio for fear that it would incite teenage violence.

Buffy Sainte-Marie (Cree, b. 1941) was one of the most influential folk singers of the 1960s. She developed her style first in college cafes and later as a member of the Greenwich Village circle that included Peter La Farge and Bob Dylan. Her ballads about Native history carried on La Farge’s tradition, and her social commentary during the Vietnam War era with songs such as “Universal Soldier” earned her attention as a notable voice of conscience.

Jimi Hendrix (Cherokee/African American/Scottish, 1942–1970) is widely considered the most influential guitarist in music history. His Native ancestry was inherited from his paternal grandmother, the first traveling performer in the family, following the vaudeville circuit across the country.

Robbie Robertson (Mohawk, b. 1943) was already an accomplished songwriter and guitarist when Bob Dylan hired him and his friends from the Hawks for the historic tour where Dylan went “electric.” Robbie went on to be one of the founders of the iconic The Band, which became a commercially successful roots-music vehicle, groundbreaking in the world of Americana for its eclectic instrumentation, purity of sound and pop refrains sung in a unique, angelic tonality.

Brothers Pat (b. 1939) and Lolly (1939–2010) Vegas (Yaqui/Shoshone) formed Redbone in 1968, after almost a decade in the music industry. During that time, the duo kept trying different gimmicks to stand out in the L.A. music scene, including surf music and Cajun music. It was Jimi Hendrix who told them to just “do the Indian thing, man,” and they launched it as Redbone. Their classic hit “Come and Get Your Love” earned them a permanent place among the most memorable song makers of the ‘70s.
-BAM 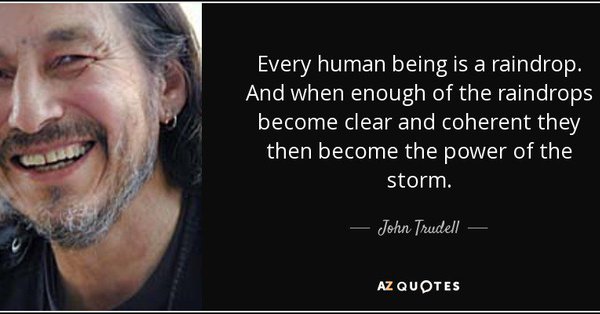 John Trudell is also featured in the film (BRAVO!) and in my new book Mental Midgets - I interviewed him in 2000. Moccasin Tracks's Deb Reger interviewed me a week ago about the book and Trudell.

Anonymous said…
Groundbreaking, i was have rewound that scene a dozen times.
It seems only fair i now offer equal time to
those talented Hollywood famous actors. Again, the live cuts may compare to your clean selections.
May 3, 2019 at 3:11 AM